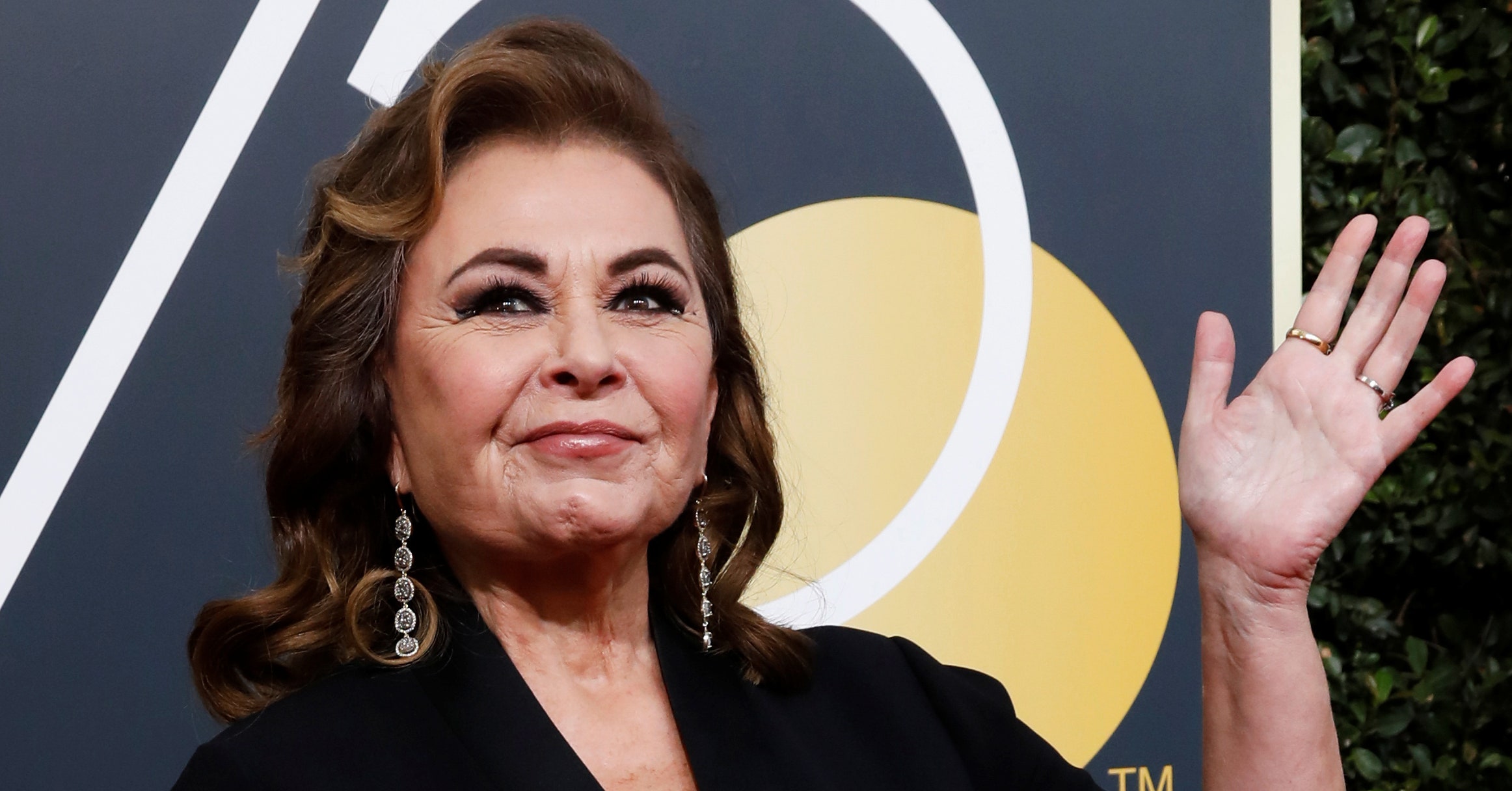 It happened so fast you almost could have missed it. Over the course of two days earlier this week, Roseanne Barr fired off a series of racist (and anti-Semitic, and otherwise conspiracy-minded) tweets, prompting left-wing outrage and calls to #BoycottABC and extreme right-wing joy. Then, amidst high-profile collaborators like Wanda Sykes announcing they’d be leaving Barr’s well-rated sitcom Roseanne, ABC announced it would be cancelling the show. And there could be no confusion about the cause: "Roseanne's Twitter statement is abhorrent, repugnant and inconsistent with our values,” ABC Entertainment president Channing Dungey said in a statement. “And we have decided to cancel her show."

In true 2018 fashion, #BoycottABC crossed the aisle, becoming a way for right-wing accounts to lambaste ABC for censoring their new celebrity spokesperson. (Not so new, really: Barr has embraced right-wing conspiracies ranging from the debunked theory that 5.7 million illegal immigrants voted for Hillary Clinton to the alleged DNC hit on staffer Seth Rich to Pizzagate.) And while Barr lost mainstream ties like ABC and her onetime talent agency ICM Partners, her tweets have been amplified by Donald Trump Jr., and many assume President Trump’s endorsement is soon to follow.

The cycle at play is by this point so well-trod that it’s entirely predictable: problematic statement begets social media outrage, which begets corporate censure, which begets counter-outrage from that person’s diehard supporters, at which point media coverage shifts to focus on the person’s path to rehabilitation. Soon, as with many of the high-profile men accused of sexual misconduct by the #MeToo movement, a wave of stories and television segments will speculate where Barr's career can go from here.

In the speed of this particular metabolic process, Barr could have been any number of celebrity powderkegs with itchy Twitter fingers. But it isn’t the outraged people on either side of the debate who are pulling the strings here. Instead, it’s the hydra of social media itself, and the internet-age economic calculus that motivates studios to take reputation-saving action when in decades past they would have done nothing at all.

Recovering From a Bad Roll

But first, take a trip back to November 2016, when ABC found itself scrambling to adjust to current events. “When President Trump won, there were debates about what his victory meant for cultural politics in America,” says Dr. Darnell Hunt, Dean of Social Sciences and professor of race, media, and cultural studies at UCLA. After the election, people began to latch onto the idea that perhaps there was a group of working-class white Americans that had been overlooked, and Hollywood began to think that perhaps it needed to do a better job of reaching out to that group. Cue ABC’s “heartland strategy.” “Regardless of whether that was true,” Hunt says, “ABC made a decision to greenlight the show, knowing it’d be provocative and controversial, and soon found themselves with a show that rose to the top of the ratings in a particularly volatile moment in American cultural history.”

Now, back in 2018, imagine you're an ABC studio exec who wakes up to a string of awful tweets from one of your stars—tweets that enrage a large portion of your viewers, but also get the admiration of the disenfranchised white people you’d been trying to win over with the show’s premise in the first place. The dice roll you made, the dice roll you acknowledged while promoting the show, has come up snake eyes. What happens next?

Social media has entirely changed how a company makes that determination. Triage involves, above all, seeing how much media attention the tweets attract. “The first thing we try to determine is what percentage is coming from New York and LA, the bubble of the media industry,” says Ben Carlson, co-president of Fizziology, which provides social media analytics for television and movie studios. “We track every show and every film and see what’s happening in real time, and we could see this conversation exploding everywhere.”

But that doesn’t mean that all non-media responses are given equal weight. A crucial part of the calculus comes down to assessing whether a particular response is coming from a large and wide-ranging audience or just an especially noisy few. The Roseanne scandal unquestionably qualified as A Thing—and one that required swift action.

“If they didn’t have a plan already in place, that was one of the most rapidly executed and highly impactful responses I’ve ever seen in my thirty years of crisis management practice,” says Jonathan Bernstein, president of Bernstein Crisis Management. “I think this is a scenario that could have actually happened: Someone in their crisis team picks up immediately, they grab their plan, it says to confer by phone, and the head of the team asks, ‘Is it DEFCON 3, 2, or 1?’” According to Bernstein, it’s highly likely that ABC had a Barr-specific plan in place, and that insta-firing Barr and canceling the show is almost certainly a Defcon 1 response—a reaction to something that would cause irreparable damage to the company’s reputation.

And Barr’s own apologies—which were both deflective and later undercut by an extended litany of passive-agressive retweets— is probably her own response to the tsunami of on- and offline criticism she’s been swamped by. “The realistic goal, at a minimum, is to achieve even a slight reduction in overall damage to reputation and the bottom line,” Bernstein says. “That’s what I see Roseanne attempting to do, belatedly, with her second round of apologies—no doubt at the ‘do this or you’re even more-fucked’ guidance of both competent public relations and legal counsel.”

Why the focus on reputation? Reputation is tied inextricably to money—it’s either your greatest financial asset or downfall. And for ABC, making it look like money wasn’t part of the equation is actually a great way to protect its bottom line in the long run. “The fact that they canceled a show that was doing well in the ratings may go a long way toward showing there are more important things than money,” says Kimberly Elsbach, a University of California–Davis professor who studies the perceptions of organizations. “Making it [appear] that it wasn’t about ratings will help secure viewers’ trust.” Viewers’ trust has always been important, but in an age when social media outrage can (and often does) lead to organized boycotts and lost advertising revenue, the stakes are even higher.

Less obvious, though, is how social media influences trust amongst those within a besieged organization like ABC—and earlier in the week, that was an urgent concern. “One of the things that’s so unique about this crazy day is how much backstage drama we saw playing out in real time,” Carlson says. Wanda Sykes wields significant influence, but she wouldn’t have been the only person ABC was worried about: Roseanne co-star Sara Gilbert is also a cohost on CBS daytime show The Talk, which affords her a massive platform. Depending on how either of them—or anyone else—chose to react to Barr's tweets could be far more damaging. “A viewer can easily choose to withdraw their support,” Elsbach says. “But if you have a family depend upon your employer it can be very difficult. What they might do instead is disidentify, reduce their efforts, or even sabotage—things that may hurt the organization even more.” Social media makes that all the easier.

Which isn’t to say that ABC is a mustache-twirling bunch of amoral capitalists—just that the network may not be making the grand gesture of civility many seem to think it has. “There’s a blurry line between moral decisions and economic decisions. Moral decisions can have an economic impact,” says Dr. Hunt. “It is not economically in the long-term interest of ABC to be allied with this kind of dehumanizing rhetoric.” Whether it be because of the fallout of potential social media outrage or concern about advertisers, the network was able to call Barr’s words “abhorrent” while also making a decision that, in the long-term, wasn’t as altruistic as it seemed.

But this decision is coming from the same network that was recently criticized for its decision to [shelve an episode of Black-ish] (http://bit.ly/2H4P9hW) that touched on a variety of political and social issues, including the rights of NFL players to kneel during the national anthem at football games. (This choice was made in spite of the fact that Black-ish has become known for its willingness to tackle controversial issues.) What do that and the Roseanne cancellation have in common? ABC erred on the side of caution in both cases—twin decisions that, regardless of their intent, reveal the gravity of the network’s concern about the viewer response.

Still, this move is likely to produce more good decisions, not less. “This sets a precedent and holds them accountable,” Elsbach says. “They’re making a contract with the public that this is how we’re going to behave in the future. It’s a real risk for an organization.” Especially one that has recently run afoul of the public eye. According to Bernstein, bobbling your social media scandals is practically an industry standard—”Ninety-plus percent are completely unprepared or seriously unprepared for their first crisis,” he says. “It’s a fatal flaw.”

That cloud of internet ignorance seems to be dissipating, though. Think back through the last six months, and how fast companies are reacting to outrage. Firings happen in days or hours; movies and TV shows are recast and reshot almost as quickly. And that’s happening in part because social media brings us so close to the people we watch on screen, and makes their networks so apparent. “Prominent members of the Hollywood community have been very outspoken about their intolerance for racism and sexism, and though they may have nothing to do with management at ABC, people see it as one big collective,” Elsbach says. “They probably never had to worry about that much before social media, but they do now.”

The DNC Enlists Kids in Its Fight Against Hackers