September 19, 2018 at 10:58AM Journalist's Resource Facebook and the newsroom: 6 questions for Siva Vaidhyanathan 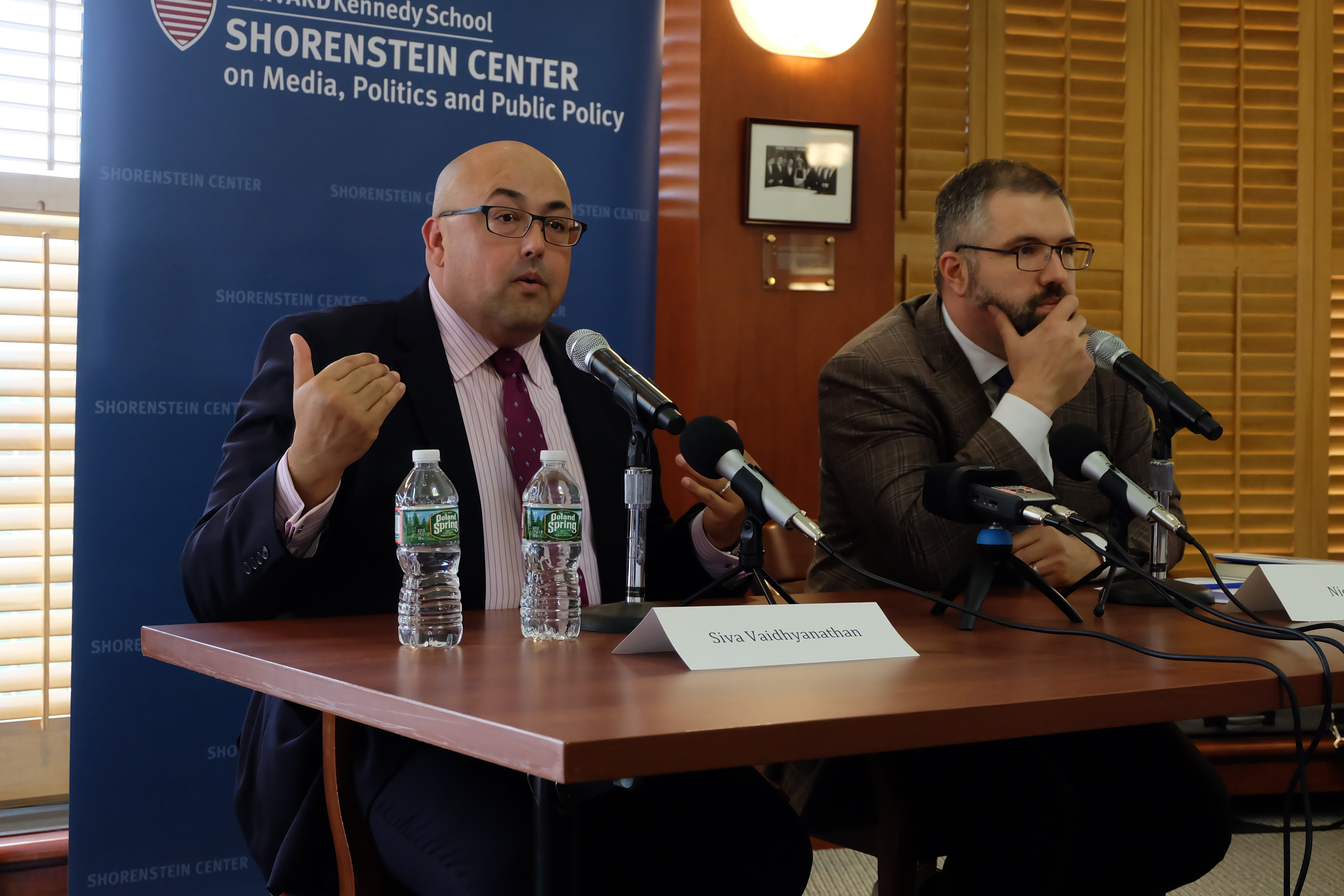 Media scholar Siva Vaidhyanathan has written often about the challenges and shortcomings of media technologies, generally criticizing the growing power of media giants Google and Facebook. In his new book, Antisocial Media: How Facebook Disconnects Us and Undermines Democracy, he details problems with how Facebook works, arguing that “no company has contributed more to the global collapse of basic tenets of deliberation and democracy.”

In the book, Vaidhyanathan, a former journalist who now directs the University of Virginia’s Center for Media and Citizenship, examines Facebook’s impact on newsrooms, many of which have integrated the social media platform into virtually every step of the news reporting process.

Recently, Vaidhyanathan came to speak at Harvard Kennedy School as part of an event series hosted by the Shorenstein Center on Media, Politics and Public Policy, of which Journalist’s Resource is a project. His visit gave JR an opportunity to ask him more about how Facebook has changed journalism.

Below is an excerpt from that conversation — six of our questions and Vaidhyanathan’s answers, which also offer insights on how reporters can do a better job covering Facebook and its influence on the lives of billions of people worldwide.

In your book, you talk about the importance of Facebook to newsrooms. And I’ve heard you say that no decision is made in newsrooms without the specter of Facebook. Can you elaborate on that and why that is or isn’t a good thing?

“Journalists want to be read or viewed. You can’t be read or viewed if your content disappears from Facebook. It is a core outlet for news distribution. Editors and designers are constantly making decisions based on what works on Facebook, so they choose images and write headlines to pander to Facebook’s algorithms and the behavior of Facebook users. It’s largely a bad thing because journalism is feeding the beast that’s starving it — the more that journalists pander to Facebook … the more that Facebook becomes the governing mechanism to journalism. At the same time, Facebook is drawing advertisers away from journalism. Facebook gets all the money and journalistic outlets create more content for Facebook and sometimes pay Facebook to promote it. It’s all absurd.”

What should journalists be mindful of when thinking about how Facebook impacts the way they do their jobs or the way they cover an issue or event?

“Even when reporters have the best possible news judgment as their primary motivator, they can’t help but be affected by the draw of click-bait: the sense that some stories, some words and some images are going to attract more attention on Facebook. And they’re quickly told by editors how well their articles or videos moved around Facebook. In many newsrooms, there is a scoreboard posted in the middle of the newsroom with the social media impacts of certain stories … You can’t help but be obsessed by [the editorial analytics platforms] Chartbeat or Parse.ly — those are the big ones.

“Facebook forces journalists to be more sensational, because the key to winning the Facebook game is to create conversations about a piece — and that usually means an argument.”

What are the main ideas — or warnings even — that you’d like newsrooms and journalists to take away from your book?

“This is going to be a losing battle for a long time, but that means journalists should turn their attention to the advertising industry. The advertising industry has been very destructive to journalism recently, and journalists should explore other means and models. The Texas Tribune, for instance, depends on philanthropy and foundations to do its work so it’s liberated from the advertising beast. Not everybody can do that. But as things are going, advertising-based news outlets might number in the single digits within a decade because all their money went to Facebook and Google. The other thing I would say is, beware if your news organization is complicit in the surveillance and ad targeting that Facebook and Google are engaged in. That might seem like the only way to compete, but it’s deeply unethical.”

Academic research, including a study from Harvard’s Berkman Klein Center for Internet & Society, indicates “fake news” played a limited role in national elections in 2016. But there’s still a lot of commentary and coverage of that issue in the media. There’s a lot of focus on how fake news was shared and distributed via social media sites such as Facebook. Can you speak to whether this ongoing conversation about Facebook and fake news is still important?

“Defining the problem as fake news is inadequate and distracting. The problem is garbage of all sorts — fake news, half-fake news, exaggerated claims, conspiracy theories, hate speech, extremist propaganda, harassment, all of which creates cacophony — constant screaming. The problem is not that some people might believe something that’s not true. The problem is that most people might stop caring if anything is true. The other thing is that if a study showed fake news had a small effect on the 2016 election, we have to remember all it took was a small effect. [President Donald] Trump won by 80,000 votes in three states. Small effects matter.”

A lot of national news organizations cover Facebook as a company and issues surrounding Facebook as a national story. But it doesn’t seem to be a focus for local newspapers and other local publications. Should Facebook be covered from a local angle and, if so, how?

“Local news organizations should pay attention to what happens on community Facebook pages. That can give them early warning to issues that matter to people and uprisings or demonstrations or protests that might be in the works. The fact that people work out their politics on Facebook these days makes it imperative that journalists understand how Facebook works in their lives.

“In terms of the larger effects of Facebook on the world, one of the reasons we spend so much time on it and do so much political and social work on it is that we have let our local institutions erode. Local journalists should pay a lot of attention to the parts of the community that enhance conversations and foster deliberation. Every library budget cut drives people to Facebook.”

Do you have any other suggestions for things journalists should be doing differently in terms of how they cover Facebook as a company and Facebook as a social media platform?

“There has been so much great journalism about Facebook and Google in the last two years, but it was all about five years too late. Journalists would not have been surprised by [the] Cambridge Analytica [data-sharing scandal] or the role of Facebook in political propaganda if they had been paying attention to social media scholars. We have been warning about these problems for nearly a decade.”

Looking for research on journalism and Facebook? Check out Journalist’s Resource’s write-up on how Facebook has become a substitute for other news sources. We spotlight several studies on digital and social media in this research roundup.

What research says about how bad information spreads online

How to tell good research from bad: 13 questions journalists should ask

The Guardian is getting into the daily news podcast game — here’s what it learned the last time it tried
Oi, you. Equifax. Cough up half a million quid for fumbling 15 million Brits’ personal info to hackers

What Developers Need to Know About Europe’s Data Privacy Rules