Before advancing a discussion on the topic of memory in relationship to the reference field, definitions need to be considered. As Thompson(1989)points out "Memory is a decpetively simple word" (p.17). To aid in contextualizing memory for this page, here are two definitions:

From Meriam-Webster On-line Dictionary (2005) : 1 a : the power or process of reproducing or recalling what has been learned and retained especially through associative mechanisms b : the store of things learned and retained from an organism's activity or experience as evidenced by modification of structure or behavior or by recall and recognition

Schooler and Loftus (2001) define memory as “the ability to store and access information that has been acquired through experience.”

Both of the definitions note experience as an important element in memory. How, which, and when experiences are remembered is what will be briefly explored. As a note, the range of topics within memory have been reduced to Semantic, Episodic and Schematic. The range of fields within memory is wider than these three areas, but for simplicity, these three realms will be the focus. 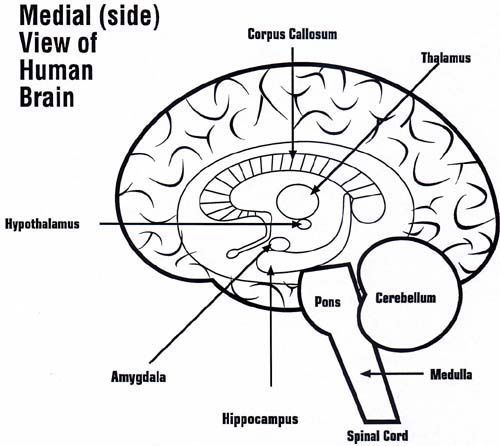 According to Ross Quillian (as cited in Neisser, 1989), semantic memory is based around what words mean. This concept today is seen as knoweldge about facts. Nelson (1989) also adds that semantic memory is "often involunerable to loss" (p. 130). Such an example would be the memory of 2 + 2 = 4, or that your name is "Joe". The catch within the realm of semantic memory is that we may not necessarily remember how we know the recalled facts. That is, we may not remember when we learned 2 + 2 = 4, but we remember it is so.

According to Tulving (as cited in Neill, 1984), "Episodic memory receives and stores information about temporally dated episodes or events, and temporal-spatial relations among the events" (p. 418). Basically, "memory for specific and personally experienced events" (Neisser, 1989, p.68). Generally speaking, in contrast to semantic memory, when accessing episodic memory, a conscious effort is done so. For example, you want to describe the concert you saw over the summer with a friend. Many images come flooding to the mind, on top of descriptions of smells, sounds and feelings. All of these are organized and sorted out by you in your recall of the concert.

Neisser (1989) points out "the first modern schema theorists... were concerned with memory for stories..." and that schema "...helps us to understand and remember particular stories as we enouncter them" (p.69). Schematic memory is close in relationship to episodic memory. But whereas episodic memory looks at a specific event, schematic memory utilizes elements of similar experiences and puts them together to make a schema. For instance, before you enter a classroom, you will be expecting to find chairs to sit in with desks or tables to write on. That expectation is built upon your schematic memory of past experiences with classrooms. Another example would be that when you're about to encounter a friend, you expect that his/her hair will be a certain length or color, based on how you remember them.

Memory and the Reference Librarian

Reference librarians are constantly exercising their memory while working. Whether it is remembering which reference source to go to, recalling past situations which seem relevant to a user's question, or what section/floor/aisle certain books may be found, the intertwining of memory practices is undeniable. It is unraveling all of these situations to see how reference librarians are accessing their own semantic, episodic, and schematic memories to empower themselves. Also, to see how these memory categories relate to the uses of external memory devices, such as printed up lists, indexes, reference sources, maps, etc.

S.D. Neill (1984) investigates recordings of reference librarians conducted by Mary Jo Lynch in 1977. By analyzing the questions and responses of the reference librarians, Neill postulates that schematic memory practices seem dominant and should be built upon "so that expectations and judgments would be more accurate" (p.418). This practice could influence multicultural practices. But overall, the studies in the realm of memory and library practices are incomplete. Neill acknowledges this calls for better protocols to obtain stronger evidence (p.423). The simple dominance of memory usage in the day-to-day routine of the reference librarian demands a better understanding of how to take advantage of memory practices and theory.