August 1, 2018 at 11:58PM TechCrunch PSA: Automatic cross-posting of tweets to Facebook no longer works as of today

You can no longer automatically cross-post your tweets to Facebook . Twitter announced today that functionality is now coming to an end, and users will instead have to copy a tweet’s URL if they want to share a tweet to Facebook going forward. In a statement, the company attributed the change to a recent Facebook update.

Specifically, the issue has to do with Facebook’s lockdown of its API platform — an overhaul that’s been underway following the Cambridge Analytica scandal, where as many as 87 million Facebook users had their data improperly harvested and shared.

Since then, Facebook has been plugging holes in its API platform to prevent future data misuse. One of those changes involves Facebook Login, announced back in April. The company said that apps that had been granted permission to publish posts to Facebook as the logged-in user would no longer have that permission. New apps wouldn’t be able use this feature the day the change was announced. And in the case of older apps, the permission would be revoked on August 1, 2018 — that’s today.

Facebook also said developers who were previously using the API could instead turn to Facebook’s Share dialogs for web, iOS and Android. But Twitter’s statement didn’t mention there would be an alternative means of sharing built back into Twitter, beyond using its existing “Copy link to Tweet” feature. This is a manual way of sharing tweets, of course, and not a replacement for what is being lost.

The option to set up Facebook sharing hasn’t completely disappeared from Twitter’s app as of yet. 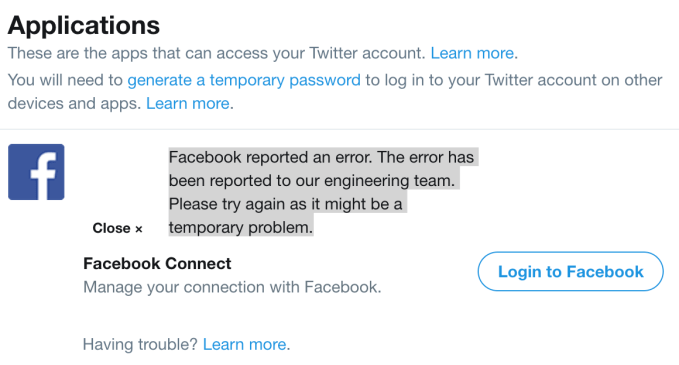 Facebook still appears within the “Apps” section via the web, with the button “Login to Facebook” seemingly waiting to be clicked. However, this option will no longer work as of today. Instead, it returns the error: “Facebook reported an error. The error has been reported to our engineering team. Please try again as it might be a temporary problem.”

It doesn’t seem like Twitter users looking for other workarounds will have much success either, given this situation. Other apps, like IFTTT, for example, are throwing errors as of today, too. 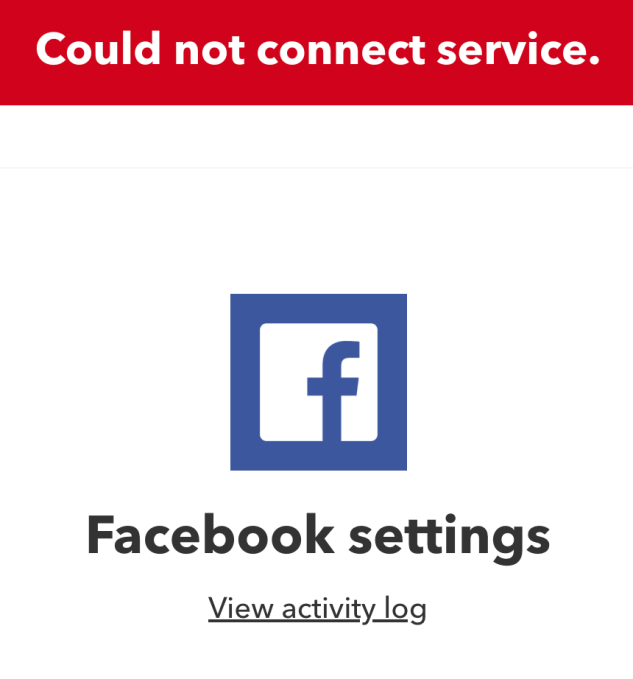 Fin7: The Inner Workings of a Billion-Dollar Hacking Group
Activists push back on Facebook’s decision to remove a DC protest event