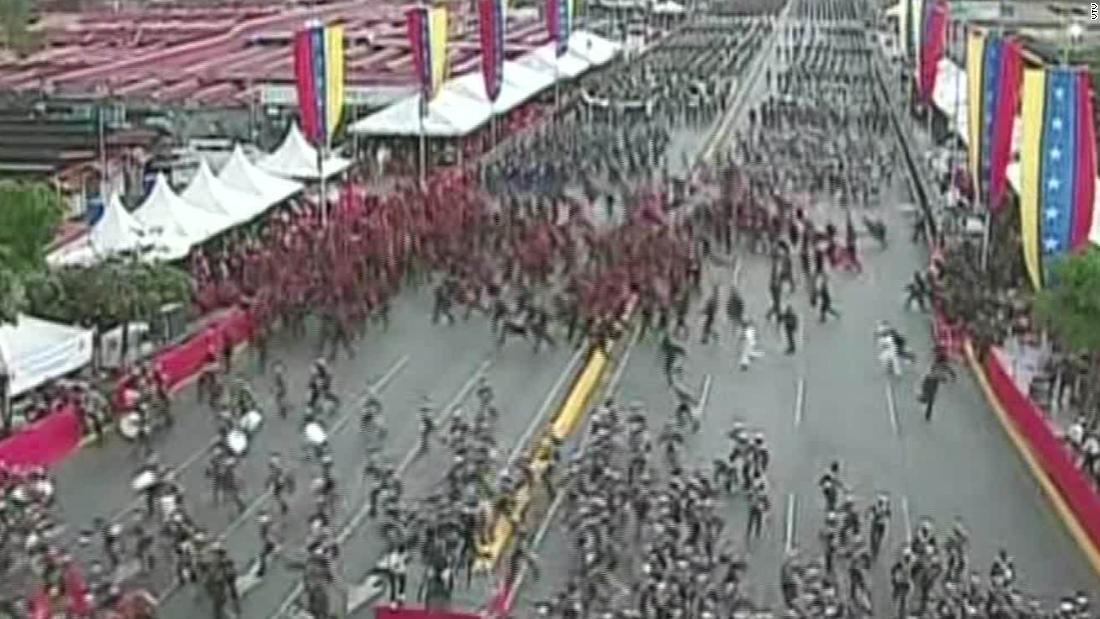 "I'm alive and victorious," he said.

Maduro was evacuated from a stage on Saturday during a speech in Caracas after what authorities concluded was an attempted "terrorist attack against the president." He spoke to the nation just several hours after the 5:40 p.m. incident.

Maduro said that as he was mid-speech in an event to commemorate the 81st anniversary of the Bolivarian National Guard, a device exploded right in front of him.

"There was a big explosion," said, adding that he initially thought it was fireworks as part of the parade. Seconds later there was a second blast, he said.

Maduro said the investigation into the incident started immediately and that some of those involved in the attack had been captured and charged, although he did not specify the charges against them.

Venezuela's attorney general, Tarek William Saab, told CNN he ordered an investigation into the incident. He said on TV in Venezuela that three attorneys have been assigned to investigate.

Speaking in front of members of the military and other government, Maduro also said that authorities were able to obtain evidence of the attack and said the investigation was in an advanced stage.

Maduro said it was "an attempt to kill me, they have tried to assassinate me today."

He blamed the Venezuelan political far right in collaboration with the Colombian far right. Maduro accused current Colombian President Santos of being behind the assassination attack with others involved.

"The preliminary investigation indicates that many of those responsible for the attack, the financiers and planners, live in the United States in the state of Florida," Maduro said.

"I hope the Trump administration is willing to fight terrorist groups that commit attacks in peaceful countries in our continent, in this case Venezuela."

The Venezuelan government has long blamed Colombia for plotting overthrows and, and far-right elements in Bogota and Miami for attempting to undercut Maduro. Ivan Duque takes over as the Colombian President next week.

A senior US State Department official travelling with US Secretary of State Mike Pompeo in Indonesia when asked about the reported attack on Maduro said, "We've heard the reports. We're following this closely."

In a tweet, the president of Venezuela's National Assembly, Diosdado Cabello, called the incident at the military parade a "terrorist attack against the president and the high military command blaming the opposition for the violence."

Venezuela's vice president for communications, Jorge Rodriguez, later addressed the nation on live TV at the request of Maduro. He said people heard explosions that corresponded to drones and heard drones detonate near a parade for the occasion.

"We established, with evidence, that this was an attempt against the president."

He said the President is safe and meeting with the ministers and high commanders of the Venezuelan military. Seven national guard officers at the parade were hurt and treated at nearby hospitals.