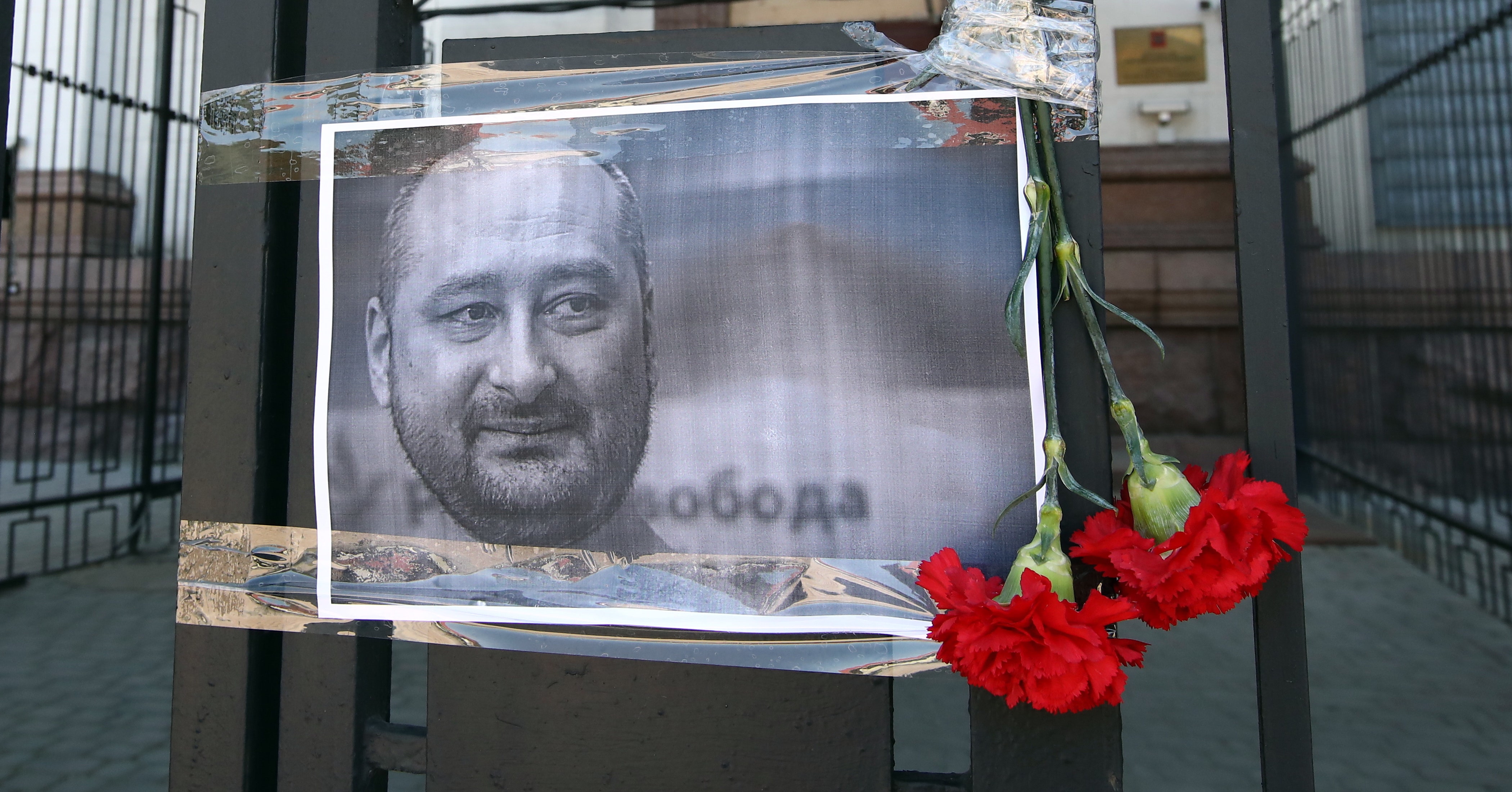 Everyone thought he was dead, possibly including his own family. On Tuesday, prominent Putin critic and Russian war correspondent Arkady Babchenko was widely reported to have been shot outside his apartment in Kiev, Ukraine. He was said to have been found by his wife, and to have died in an ambulance en route to the hospital. But the next day, Babchenko showed up to a press conference, undeniably alive.

It turns out Ukrainian authorities helped Babchenko fake his own death, in a stunning, nearly unprecedented plot orchestrated to protect the prominent journalist from actual harm. The head of Ukraine's security services, Vasyl Gritsak, told reporters at Wednesday's press conference that law enforcement arranged the made-up murder in an apparently successful effort to catch criminals who really did intend to kill Babchenko.

The audacious scheme has since raised concerns from other prominent Russian journalists—and has the world wondering how Ukrainian authorities pulled it off.

Faking Your Own Death

At the press conference, Babchenko apologized to his wife Olechka, though it was not clear what role, if any, she played in the operation. He also said it took two months to execute the plan, and that it had been successful. "One person has been detained," he said, according to a translation of the conference posted by Sky News. Gritsak later added that authorities have identified a Ukrainian citizen who was allegedly paid $40,000 to kill the reporter.

"I would like to apologize for what you all had to go through...because I've buried friends and colleagues many times, and I know it's a sickening-vomiting feeling when you have to bury your colleagues," Babchenko reportedly said. A video was later posted to Twitter purportedly showing Babchenko's coworkers at the Ukrainian TV station ATR cheering when they learned he was still alive.

Just a day earlier, Kiev Police Chief Andrei Krishchenko had told reporters that "the first obvious" motive for the murder was Babchenko's long history of criticizing the Russian government. The Ukrainian Prime Minister, Volodymyr Groysman, also said on Facebook that he believed Russia had been involved in the assassination. Police in Kiev went so far as to release a sketch of the man they believed to be "responsible," according to CNN, all part of an elaborate ruse.

'The credibility of all media is undermined.'

The faked murder plot has raised concerns from many Moscow-based journalists, who though relieved Babchenko is alive, say the plot may further erode trust in the media and serves to provoke the Russian government. Establishing truth in Russia is incredibly difficult, in part because so few independent outlets exist. Television, the most popular source of news and information, often functions as a government propaganda tool. Journalists are also regularly subject to arrests, threats of violence, and targeted attacks, according to Freedom House, a watchdog organization that monitors political freedom.

Some of those dynamics have already come into play; after the death was revealed as a fake, Russian foreign ministry spokesperson Maria Zakharova described it on Facebook as a propaganda exercise—adding that she's glad Babchenko is alive.

"If it was indeed a Russian hit, that's a whole new story, but everything else is now a provocation," says Alexey Kovalev, a journalist in Moscow who often reports on misinformation. He says he worries Russia will now say that every Kremlin-linked incident reported in the press was staged, like the recent poisoning of Sergei Skripal, a former Russian military officer who also worked as a spy for the UK's intelligence services.

"I think it was a very bad idea for a journalist to take part in this operation," says Andrei Soldatov, a Russian investigative journalist and the author of several books including The Red Web: The Struggle Between Russia's Digital Dictators and the New Online Revolutionaries. Soldatov says he believes the incident will make it harder for journalists to credibly discuss the difficulty of reporting on the Russian government. "The credibility of all media is undermined," he says. A number of other Russia-based journalists echoed similar concerns on Twitter.

Ukrainian authorities have yet to reveal how they orchestrated the fake assassination of Babchenko, or why it was necessary to carry out the plot to catch his would-be actual killers. The situation is largely unprecedented; most individuals who have faked their own deaths have done so in order to evade police, not assist them.

One reason Ukrainian authorities could so successfully stage Babchenko's murder is that it was entirely plausible.

In one similar incident from 2015, Texas authorities helped a man named Ramon Sosa fake his own murder. Sosa's wife had tried to hire a hitman to have him killed; in a sting operation, law enforcement put stage makeup on Sosa to make it look like he had been shot in the head, and took photographs of him in a shallow grave in the Texas desert. Those photos were then shown to his Sosa's wife, who believed she had successfully hired a hitman who was in reality an undercover cop. She's now serving 20 years in prison for solicitation of murder.

One reason Ukrainian authorities could so successfully stage Babchenko's murder is that it was entirely plausible. The Committee to Protect Journalists says that 58 reporters have been killed in Russia since 1992.

Babchenko rose to prominence in Russia for authoring the 2009 book One Soldier's War, a memoir about fighting in the Russian army during the first and second Chechen wars. He later became a war correspondent, reporting on a number of Russian conflicts. He often received death threats and feared for his life.

The reporter finally left Russia for Ukraine last year, after saying that he had no sympathy for those killed in a Russian military plane crash, enraging the Kremlin. Babchenko later wrote in the The Guardian that he only intended to remind "readers that Russia was indiscriminately bombing Aleppo, without recognizing that dozens of children were dying in those bombs."

Babchenko has also recently spoken out against the Kremlin in the United States, in March, he gave a speech in New York at PutinCon, a conference featuring critics of the Russian president. He said he "eventually escaped from Russia after being afraid for years that they would arrest me, that they would find me at my building's door and beat me in the head; I was afraid that they would come for me."

It turns out he was right; someone apparently did intend to murder him. The worry now is that the grand ruse to save Babchenko's life may also serve to further embolden the Kremlin.

‘Marshmallow test’ may not pick out successful kids, after all
San Francisco to Uber, Lyft: If your drivers aren’t employees, prove it